The Economic League, also known as Section D (by the Special Branch), The Vigilance Committee or The Odd Fellows was a far-right organization that transcended government and resorted to extreme measures to oppose its perceived enemies. It was comprised of businessmen, army officers and members of parliament. 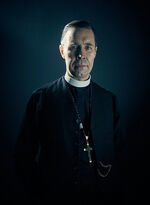 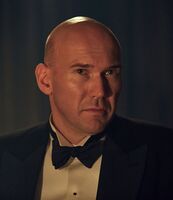 Patrick Jarvis
Add a photo to this gallery

According to Father Hughes, their goal is to save the country from revolution and that the time is coming soon when everyone must choose a political side. However, since the election, the Government has decided that they are the enemy. The members fail to come to the meeting with Thomas Shelby, scheduled at 5 AM.

They're a law unto themselves. You can never quite grasp who they are. Like gripping wet soap.  —  Father Hughes to Thomas Shelby

Mr. Shelby, you will learn that these men are far too grand for the clock to govern them. You'll get used to meeting in the small hours of the morning. They're like monks.  —  Father Hughes to Thomas Shelby

Retrieved from "https://peaky-blinders.fandom.com/wiki/The_Economic_League?oldid=11733"
Community content is available under CC-BY-SA unless otherwise noted.