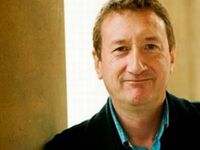 Date of Birth
1959 (age 60)
Birthplace
Marlborough, England, UK
Role
Screenwriter
External Links:
IMDB Site
Steven Knight is an English screenwriter and film director. He is the creator and writer of Peaky Blinders. He wrote and directed the films Locke and Hummingbird. Also, he has written the screenplays for the films Closed Circuit, Dirty Pretty Things and Eastern Promises. Furthermore, he is one of the three creators of the television game show Who Wants to be a Millionaire?

As well as Peaky Blinders he has written for BBC programmes Commercial Breakdown, The Detectives and Taboo.

Retrieved from "https://peaky-blinders.fandom.com/wiki/Steven_Knight?oldid=11807"
Community content is available under CC-BY-SA unless otherwise noted.