Season 5 sees the world thrown into turmoil by the financial crash of 1929. Opportunity and misfortune are everywhere. When Tommy, who’s now an MP, is approached by a charismatic politician with a bold vision for Britain, he realises that his response will affect not just his family’s future but that of the entire nation.[2]

Filming for the fifth series officially began on September 17, 2018[3]. On October 10, a screenshot showed filming taking place outdoors[4]. Another screenshot featuring Cillian Murphy on the set was also released that day.[5] The series wrapped up filimg January 18, 2019[6].

The show's creator Steven Knight revealed that the antagonists of the fifth series were by the notorious gangs of Glasgow, saying that "a particular gang called The Billy Boys" would become the new threat for the Peaky Blinders in Birmingham.[7] 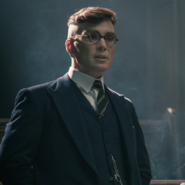 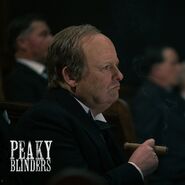