View source
watch 02:17
Who is May Carleton?
Do you like this video?
Play Sound

Charlotte Riley
May Fitz Carleton is a wealthy widow who owns racehorses. and enlisted by Thomas Shelby to train his horse for Epsom. She is the proprietor of Carleton stud.

May Carleton comes from a well-to-do family. She is well connected with everyone from the war-office to racing-board. Since her husband’s death, she has lived alone in her late husband’s mansion. Though she's a rich widow and a successful race-horse trainer, she is lonely and bored with her strait-laced life.

May Carleton is at the horse auctions with her father, when Thomas Shelby and his gang arrive. Her interest is piqued by Thomas, and she bids on the race-horse he's trying to buy to gain his attention. Afterwards, she offers to train Thomas's new horse.

Thomas eventually does hire May to train his new horse, who he names Grace’s Secret.

Thomas invites himself over to May's mansion to get a progress report on his horse. She reveals that she has lived alone since her husband’s death.

Later, Thomas visits May to confess that he still loves Grace and that they should separate. But May tells him: 'You’ve told me about her like a gentleman – now kindly behave like a gangster for me again,' before adding: 'I will win you.'

At Epsom, Thomas bids a cryptic goodbye to May as she prepares his horse for the Derby, where the Peaky Blinders plan to hold up their rival Darby Sabini’s bookmakers and burn their licenses. May has influence with the Board and can make sure that all the applications for legal pitches from Sabini's men at the Derby will be denied and instead allocated to Thomas's bookies.

After the race, May and Grace both wait for Thomas to turn up in the bar and find them, but instead find each other. They have a exchange of words: May can ensure that the bookie’s licences go with the Peaky Blinders, while Grace fires a parting shot about the horse’s name.

Thomas and May haven’t seen each other for years. They meet again for the first time at Charlie’s Yard when she comes to collect the horse. Her meeting with Tommy is interrupted by Lizzie Stark who insults her by saying Tommy is weak and cannot resist something expensive. She leaves a blanc cheque for the Grace Shelby foundation in response to this. She is forced to stay the night after Tommy tells her there is a strike among the train drivers union and agrees to meet him at his Gin distillerie.

At the Gin distillerie she tastes Tommy's Gin, telling him it is too sweet before they kiss. She tells Tommy that she wishes he could change. Much to her dismay she learns from Curley that the mafia is after him.

After she refuses his affections and attempts to get her to join him at a suite in the Midland Hotel, and informs her the strike was a lie before he puts her on a boat back to the train station.

She is mentioned by Oswald Mosley during a conversation between himself, Ada Thorne and Thomas Shelby.

May lives quite an elevated life. Thomas and May’s relationship is that they’re both quite lonely in their own ways.

May: "Is there? With Thomas Shelby?"

Grace: "What do you want from him?"

"I'm May Carleton. I train Thomas Shelby's horse. And you're the woman he said would sail away." — May during her first encounter with Grace Burgess

"You... have lost your wife, and now your brother too. I thought it would make you different, but it doesn't seem to change you. Nothing seems to change you." — May Carleton to Thomas Shelby

"The truth? You're unlike any man I've ever met." — May Carleton to Thomas Shelby 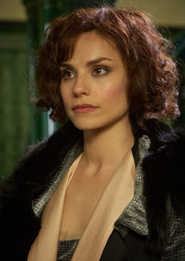 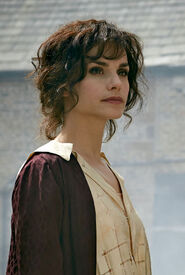 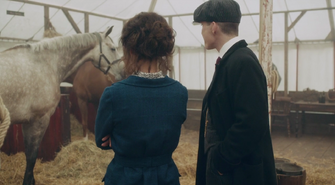 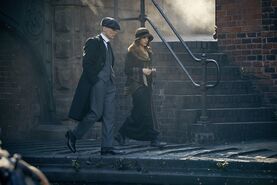 Thomas and May Carleton
Community content is available under CC-BY-SA unless otherwise noted.
Advertisement