View source
watch 01:47
Who is Luca Changretta?
Do you like this video?
Play Sound

Shot in the head by Arthur Shelby

"Instead of sending you a black hand, I could've killed you in the night without knowing why. But I want you to know why, and I wanna suggest to you that we fight this vendetta with honor."
—Luca Changretta

Luca Changretta is the main antagonist of the Season 4 of the series. He is an Italian-American mobster from New York City, the son of Audrey and Vicente Changretta, and the new leader of the Changretta family.

Luca Changretta was an Italian-American mobster, son of Vicente Changretta and Audrey Changretta and a leader of the Changretta mob. His mob does work in the liquor business stationed in New York. The mob has a heavy rivalry with Chicago's Al Capone, as New York is an important trading port for transporting alcohol from Europe. Changretta is also a soldier for the Spinietta family.

In approximate 1919-1920 Luca Changretta came from New York to Birmingham to be best man at his cousin's wedding.

After his father and brother, Angel Changretta, are killed by the Peaky Blinders he obtains enough information from his surviving mother, Audrey, to launch a vendetta in Birmingham against Thomas and the rest of the of the surviving Shelby family.

Luca would make his first appearance in Episode 4.1 while crossing into Liverpool. The guard at the passport check noticed something was amiss after admitting passage from several Italian Americans in a row. He proceeded to question Luca who answered indirectly. The guard became nervous, and with nothing legitimate to stop admittance, stamped Luca's passport.

In Episode 4.2, Luca makes his first acquaintance with Thomas Shelby. He set up a meeting through Thomas' factory and went by the title "Monsieur Pan". The two began a duel of words, talking back and forth, attempting to get the best of one another until Thomas openly called Luca by his real name. It was then Luca revealed that he was in Birmingham for the sole purpose of destroying the Shelby family and name in a vendetta for the death of his father, Vicente Changratta. The two agreed that the war would be fought with honor, no children were to be harmed and no police were to be used (which Thomas would later break). As Tommy later finds out in Episode 4.2, Luca and his mother planned to either let Thomas Shelby live, or leave him to die last after the rest of his family is killed off, as this would cause him the most amount of pain.

It was during the events of Episode 4.3 where Luca would make contact with Polly Gray who would agree to the terms of giving Thomas up and let Arthur, Finn and Michael Gray live. It was at this meeting where Luca would utter the threatening words "you're dancing with me", indicating Polly should not cross him if they want to live.

In Episode 4.3 Luca sends 2 of his men after Arthur Shelby, who manages to kill both assassins. Angered by the loss of his men and the comments he receives from Matteo regarding the food in Birmingham, Luca force feeds him a scone. After calming down, his men suggest to work with Mrs. Ross to trap Arthur Shelby, which he agrees to.

In Episode 4.4 the trap setup for Arthur Shelby is a decoy by Luca and his men so they can get to Michael Gray, Luca puts a gun on Michael's forehead and pulls the triger, revealing that his gun was not loaded. He tells Michael to pass the message along to Polly Gray that they have a deal before leaving. He is later ambushed by Aberama Gold and his men, losing 2 of his own men in the process. The episode ends with Luca and 4 of his men following Tommy Shelby back to Artillery Square.

In Episode 4.5, Luca and 4 of his men chase Thomas Shelby to Artillery Square, trying to ambush him. Thomas however is aware of the planned suprise attack and opens fire on the Italians, killing 1 out of the 5 that are chasing him. During the rest of the chase Tommy is able to kill 2 more before Luca challenges Tommy to a duel between the 2 of them, however this is stopped by the Birmingham police before it can even start. Later he and Matteo visit Alfie Solomons to get him to smuggle Luca's men in the building where the boxing match between Bonnie Gold and Goliath is to take place. In return for this Alfie asks for a export deal of 200 barrels of his Gin per month and that Luca has all of his men circumcised.

In Episode 4.6, Luca orders two Italian assassins to murder Arthur during the event of the boxing match. This was heavily hinted at the end of Episode 4.5. One of the assassins successfully tricks Arthur into following him into the changing rooms. After Arthur searches for the man, he is ambushed and supposedly killed by asphyxiation. Tommy precedes to inform his family members that Arthur has died, before going into the ring after the fight has ended and he proclaims his brother's death to the audience. This gives Luca the impression that his plan had worked.

The next sighting we find of Luca is of him and around a dozen mob members, including his closest member, Matteo. He orders for Tommy to sign several pieces of paperwork to hand over Shelby Company Ltd. to Luca and the Changretta family. However, Tommy informs him of the rival gang in New York that is about to take over the Changretta business, and reminds him that Luca has no blood-related mob members left. In a surprise turn of events, he also tells Luca that his men now work under Tommy, as he is now the 'highest bidder'. Luca is enraged by this and tries to shoot Tommy, who retaliates by knocking the gun out of his hand and the two have a fist fight in the cellar. After an intense fight, the Shelby's come out on top, as a surprise figure comes storming through the doors nearby. There stands Arthur, who was presumed dead by everyone except Tommy and Polly, who both knew all along that Arthur was majorly injured, not dead. Tommy explains this, and Arthur keeps his promise on avenging his deceased brother John, by shooting Luca in the forehead with a pistol.

Like most Italian mob/mafia dynamics at the time, Luca and his brother, Angel, had extreme respect for both his mother and father. Since the death of Vicente Changretta, it was Audrey Changretta who would launch base orders from her position in New York. Luca made sure to mention the wishes of his mother to Thomas upon their first meeting. Luca would later reference his mother throughout the rest of the season. However, little does Luca know that Thomas and his mother have an extremely torrid affair that was kept surreptitiously from Luca. It was extremely unfortunate however, when Luca found out because John Shelby was killed as a result.

"We are an organization of a different dimension, you dress well, Mr. Shelby. But now I see, not so well as me." - Luca Changretta to Thomas Shelby

"You know, my mother used to say this about you. She said, "That Polly Gray, that child would never let go of a grievance."- Luca Changretta to Polly Gray

That's a shame cos you're dancing with me. - Luca Changretta to Polly Gray

"All that is left of the Peaky fucking Blinders." - Luca Changretta to Thomas Shelby, Polly Gray and Finn Shelby

"I would have buried you all. But my mother, she knows you. She said it'll be worse for you if I let you live and take away everything that you have." - Luca Changretta to Thomas Shelby, Polly Gray and Finn Shelby 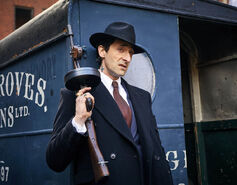 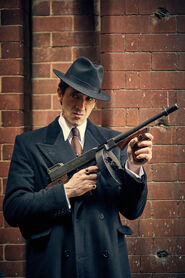 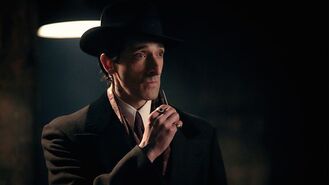 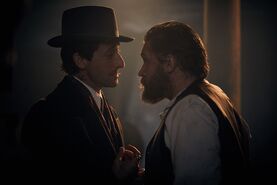