View source
watch 02:30
Who is Lizzie Stark?
Do you like this video?
Play Sound

She was a former prostitute, living in the city of Small Heath, Birmingham, before working with the Shelby Family and becoming Thomas’ assistant.

When Thomas Shelby finds out that Lizzie is to be married to his brother John Shelby, he confronts her, offering her eight pounds to see if she is still a working prostitute. When Lizzie takes the money, thereby failing Thomas' test, he informs John, who asks Lizzie and then her family if it is true. Lizzie tells him Thomas is a 'dirty liar', but her family says otherwise, telling him she still continues her work, but only with regular clients. John comes to the conclusion that Thomas must have been a regular customer, which he later confirms, and then calls off the marriage. Despite the unfortunate circumstances, Lizzie and John end up remaining friends.

Lizzie is seen next in Episode 2.1, after having sex with Tommy in his office. She admires the typewriter, telling him she also has one and is doing a correspondence course, where she is learning to type with her eyes shut. He places the money on the table, which she takes, before she tells him "I wish just once you wouldn't pay me. As if we were ordinary people."

Later, once again in Thomas' office, he asks her to close her eyes and guides her over to the seat at the desk. He covers her eyes with his hand and asks her to type on a typewriter, "If winter comes, then can spring be far behind?" He offers her a job as a secretary for his expanding Shelby family business, offering to pay her eight pounds and four shillings a month, telling her she can stop her prostitution work permanently. With "no exceptions." Lizzie accepts the job.

Lizzie was present at the new grand opening of The Garrison Pub. She is offered a light for her cigarette by Arthur Shelby who was high on ‘tokyo’ in the moment. At the Epsom Races on Derby Day, Lizzie is escorted by Jeremiah Jesus to Thomas Shelby, who had told her he had a job for her to do. Lizzie finds out that the job involves playing the role of a prostitute and luring a soldier named Field Marshal Henry Russell to a quiet place when the races begin.

Though she initially resists, she does the job for Thomas. Before Thomas leaves, he promises to save Lizzie before she is forced to sleep with Russell. Thomas is late to find Henry Russell but eventually, Thomas succeeds in killing the man although not before Russell almost rapes Lizzie. Lizzie points Thomas's own gun at him in anger and shoves him backwards before leaving. She is later seen sat at a table, bruised and cut, and is joined by Arthur and John. John believes she acquired the injuries from doing her old work, and although she doesn’t tell him the truth about what happened, she tells him she does not see the same look in his eyes as she does in Thomas’ and that he should ‘get out’.

Lizzie's involvement with the Peaky Blinders becomes more apparent during the course of 1924. Her relationship with Angel puts the Peaky Blinders in a predicament and Polly forces her to break up with him, solving the situation. John, however, does not believe that the threat from the Changretta's to be over, and beats Angel and his men up, threatening them and telling them to stay away from Lizzie.

After Grace's death, life for Thomas becomes difficult and Lizzie reveals to Polly Shelby that she has occasionally been sleeping with Thomas since Grace's death.

In 1925, Lizzie and Tommy grow closer following Grace's death. In Blackbird Tommy takes Lizzie to the canal, revealing that he used to wait there for Greta prior to France, and that he hasn't been back there since, but wanted to go back with Lizzie. With this, he kisses her, and the two have sex by the canal. After, he instructs Lizzie that Shelby Company is to increase non-taxable donations to charities by 25% as of that moment and he is to build two new institutes for destitute children, with Lizzie in charge of the project. She questions the reason, with Tommy admitting that he promised someone he would change the world and wants to keep his promise.

In Dangerous Lizzie becomes jealous of Tommy's interactions with May Carleton and turns to alcohol. Eventually, she talks with Polly, who reveals that Lizzie is pregnant. Lizzie admits that the baby is Tommy's. Lizzie reveals this information to Tommy in The Duel and Tommy insists that she take paid leave to take care of her self and the baby.

During 1929, Lizzie feels as though she is losing contact with Tommy, as he begins hallucinating over his dead wife, Grace. She writes him a letter in fear of him losing control of his company, however he ignores the letter and the two grow further apart. Eventually, Linda visits Lizzie, admitting that she has looked for a solicitor to divorce Arthur, but cannot get anyone to do it. Lizzie admits that she will need to seek one from London as nobody in Birmingham would dare divorce a Shelby.

When tensions grow between Aberama and Tommy, she fires a gun into the air, insisting that Tommy leave the house and the children and not return, but is dismissed by Tommy who tells her to go back inside the house and call Aberama an ambulance. Knowing that Linda planned to divorce Arthur, Lizzie reveals that she too found a lawyer willing to divorce the two, but decided to stay with Tommy as it is what they vowed when they married. Lizzie promises not to be with anyone else, with Tommy promising not to have other relations on the same house as Lizzie, while also proclaiming that she belonged to him.

At first, Lizzie resents Thomas for ruining her potential marriage with John and for manipulating her into telling him about her prostitution work. In the second series, Thomas asks Lizzie to be a secretary of sorts for him, under the one condition that she no longer continues her prostitution work. At the Epsom Races, Thomas asks Lizzie to seduce a military officer as a distraction. Though Lizzie is clearly uncomfortable with the notion of reverting to her prostitution work, she does so anyway, but not before Thomas promises her he will return before it goes too far. The officer is seen forcing himself upon Lizzie to her dismay before Thomas can reach them, but upon doing so, he kills the officer.

Throughout the fourth series, Lizzie and Thomas continue to have a sexual relationship and Lizzie becomes pregnant and gives birth to Thomas' daughter, Ruby Shelby.

In Series 5, Lizzie and Thomas are married. Lizzie is raising Ruby and Charles but her marriage with Thomas is strained as he is still hallucinating Grace’s ghost. Lizzie is tired of Thomas always being too busy with business for their family and debates divorcing him when she finds a lawyer in London who will represent her. She ultimately decides to stay with Thomas on the conditions that he does not "fuck another woman in their house" or a day after holding the hand of their children.

In Series 1, Lizzie is engaged to become John's wife and helps look after his children. When his brother Thomas finds out and confronts her, Lizzie tells him that John is "a good man" and that she loves him. However, this still isn't enough to stop Thomas, who had been one of Lizzie's customers, from telling John about Lizzie's continued prostitution work.

Despite the fact that she didn't end up marrying John, Lizzie continues to be good friends with him. When she is emotional after her bad experience at the Epsom Derby, John comforts her but mistakenly assumes she was still working as a prostitute and had a bad experience with a client. Lizzie doesn't correct his mistake, instead reminding him of how much better of a man he is than Thomas, and that she thinks he should leave the Peaky Blinders gang before it potentially ruins him too. These honest words from Lizzie leave John speechless for a moment.

It is presumed Lizzie was upset after hearing the news of John's death, as her reaction was never shown.

Lizzie Shelby is good friends with Jeremiah Jesus, the street preacher, who is first seen sat next to her at The Garrison Pub during its reopening. Jeremiah also escorts Lizzie to the Epsom Derby to do a job for Thomas.

Lizzie is also a friend of fellow Peaky Blinder Arthur Shelby, who joins the company of John and Lizzie while they are speaking briefly at Epsom.

In Series 5, Lizzie is close with Arthur's wife Linda. The two meet and discuss their futures with their husbands, but Lizzie advises Linda not to leave Arthur for another man as he would kill him.

Lizzie: "Your brother is ten times the man you are."
Thomas: "Of that, I have no doubt."

Lizzie: "No exceptions, there's been no hardship. You know why?"
Thomas: "Hmm?"
Lizzie: "Doesn't matter."

Lizzie: "John, I don't see the same thing in your eyes that I see in Tommy's. You should get out."

Thomas: "Want a Drink Lizzie?"
Lizzie: "I don't drink whisky or gin anymore Tom."
Thomas: "Why not?"
Lizzie: "Because they say it harms the baby. And yes it can only be yours, the day by the canal when you were fucking somebody else in your head. Except it wasn't her who got pregnant"

Thomas: "The deal is... you belong to me. My property. No one touches my property."
Lizzie: "I touch myself but it's still you anyway, so that's why I put the phone down." 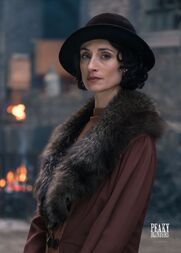 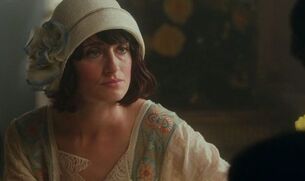 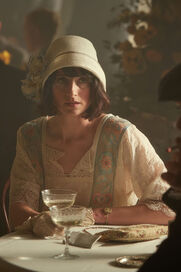 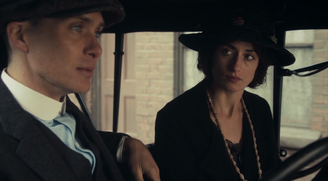 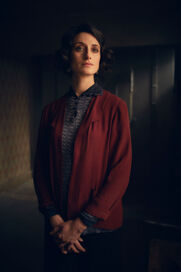 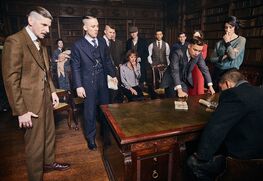 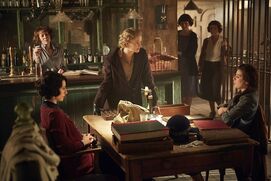 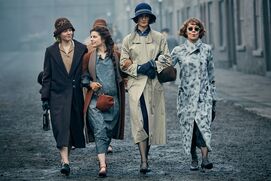 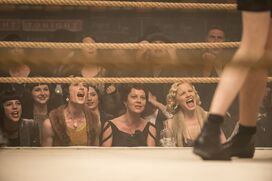