View source
watch 01:51
Who is Johnny Dogs?
Do you like this video?
Play Sound

Arrow House (lives on the land)

Johnny Dogs is a friend of Thomas Shelby. He has close ties with both the Lee Family and the Shelby Family.

He gives Thomas a new horse in exchange for getting to ride in the Shelby Family Car. Johnny Dogs also wedded John Shelby and Esme Shelby after he brought Tommy to make peace with the Lee Family.

Johnny Dogs works for Thomas Shelby and unloads products from the B.S.A into Camden Town. Johnny Dogs distracts the police officer guarding Field Marshal Russell's house to give John Shelby enough time to slip an explosive through the letter box.

He helps Thomas Shelby by cleaning up the body of Antonio after Tommy unmasks him as a hired assassin and kills him with a meat hook.

The next morning he attends the meeting and is informed about the vendetta with the Changretta's, hating the fact that Tommy enlisted the help of Aberama Gold and his men. Later he is seen preparing everybody in Small Heath.

With Aberama believing Johnny gave up their location to the Billy Boys, he is attacked by Aberama Gold after the killing of his son Bonnie Gold, taking him to Tommy's house. Tommy calms down Aberama and has Lizzie call an ambulance for him, taking Johnny back inside so he can heal, but not before making it clear to Tommy that he "is no black cat". Later he is caught while sleeping with one of the maids and is sent to Scotland together with Arthur Shelby to stop Aberama Gold from taking revenge on the Billy Boys.

He is single because his wife had a change of heart, leaving him to raise his only son and two daughters.

Johnny Dogs: “So, your first fair since France?”

Thomas Shelby: “What do you know about France, you war-shy Gypsy bastard?"

Johnny Dogs: "Oh, fuck, Tom. I thought your sporting days were over?" 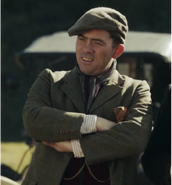