View source
watch 02:07
Spider-Man: No Way Home Trailer Dropped - The Loop
Do you like this video?
Play Sound

Brian Gleeson
Jimmy McCavern is the leader of the Billy Boys and a member of the Glasgow razor gang. He is first introduced following the Wall St. Crash and is responsible for the death and crucifixion of Bonnie Gold. He serves as the secondary antagonist of Series 5 of Peaky Blinders.

Nothing much is known about his history, other than the fact that he has ties to Oswald Mosley as the two have had some kind of interaction and history together in the past, presumably he is one of the men Mosley rallied to his cause when creating his new political party.

He is first introduced in Black Cats, where he ambushes Aberama Gold in the forest where he is staying and kills his son, Bonnie Gold. McCavern does this to send a message to Tommy that the Billy Boys are done being subjected by the Peaky Blinders and it is time to share out what they own. Aberama is heartbroken by Bonnie's murder, and promises to get his revenge on Jimmy for what he has done to his son.

Aberama's revenge plan is soon put in motion when he ventures to Scotland posing as road workers. As the Billy Boys approach, Aberama and his men attack them, pouring tar on their faces to send McCavern a message. Despite this, Tommy strikes a business deal with Jimmy regarding the shipment of pure opium, much to Aberama's dismay, who is eventually convinced to call truce on the war.

Aberama's hate does not end there however, and he attempts to kill McCavern on the night of Mosley's speech. He sneaks up on McCavern, who is providing security at the event, however is stabbed to death by an unknown assailant.

McCavern is a cruel man who is not scared to use others to send a message. He left a scarecrow in Tommy's yard with a message for him despite the fact that Charles Shelby could have been injured by the minefield around. Moreover, he murdered Bonnie Gold in order to send a message to Tommy, showing no remorse for his actions as he strung him up on a cross.

He seems very strongly against catholics and gypsies, despite his temporary agreement with Thomas Shelby. 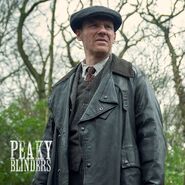