View source
watch 01:37
Who is Isaiah Jesus?
Do you like this video?
Play Sound

" I was going to be an accountant. But everybody said I would be wasted, counting money, instead of stealing it."
—Isiah Jesus to Ada Thorne

Isiah Jesus is the son of Jeremiah Jesus and member of the violent criminal gang, Peaky Blinders. His father fought alongside Thomas Shelby in WWI and as a result, Isiah is respected by the Shelby Family and is a close friend and companion of the youngest brother, Finn Shelby.

Isiah is one of the first friends that Michael makes when he becomes involved with the Peaky Blinders. The two become instant friends and, one night, decide to go drinking at a local pub, The Marquis of Lorne. When they arrive at the pub, one of the customers refuses to drink in the same pub as a black man. The man demands that Isiah leaves, however Isiah refuses, remarking that the man should instead leave. Initially, the man does not know that Isiah is a Peaky Blinder, nor that he is in fact with Michael Gray, and the two begin fighting with the men in the pub. The fight quickly comes to a halt, however, when the barman reveals that Michael is Polly Shelby's son — the men immediately stop the fight and apologise.

Isiah attends the wedding of Thomas Shelby and Grace Burgess, attempting to woo the ladies, he asks Tommy if cocaine is allowed at the wedding, however he immediately bans cocaine for the day in an effort to impress Grace and her family. Along with the rest of the Shelby family and Peaky Blinders, he manages to obey Thomas' orders throughout the chaotic day.

Isiah is involved in the meeting between the Peaky Blinders and Vicente Changretta, along with John and Arthur Shelby.

Isiah is a close friend of Michael Gray, son of Polly Gray, and introduces him to the ins and outs of being a Peaky Blinder (such as drinking and smoking) when Michael first joined.

Isiah is also often seen with Finn Shelby. In Season 5 he was present when Finn was shot in the arm and later secured him as Aberama Gold pulled the bullet out.

However, after Billy Grade is revealed to be the informant at the Arrow House, Finn would attempt to shoot Isiah after being given a gun by Duke Shelby to finish off Grade. Fortunately, Duke emptied the first two chambers of the gun, saving Isiah's life and having Finn banished from the Shelby Family. 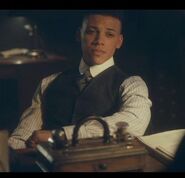 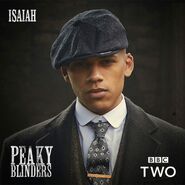