Irene O'Donnell is a Pro-Treaty Paddies who works with Donal Henry and Chester Campbell to blackmail Thomas Shelby into carrying out an assassination.

Irene has a son named Sean who attends the Cherrywood Road School in Harborne. He is crippled, described by Thomas Shelby as having “irons on his legs”, making him unable to run, coming last in every race.

Along with Donal Henry, Irene meets with Thomas Shelby at a rival pub called The Black Lion, to blackmail him into doing their bidding.

She is surprised when Thomas reveals that he knows her identity and about her son. However, she does not allow Donal to kill him, stating that Thomas has been chosen by "an informed consensus", because he researches his enemies. She informs Thomas that a vacancy has appeared and that he is going to fill it, telling him to shut up and listen.

Irene appears to be slightly impressed with Thomas’s intelligence, while also being disgusted by his gangster lifestyle.

During a meeting between Thomas and Campbell, Irene and Donal are also present. Thomas realises that the three of them are working together, which amuses him, and that they were the culprits behind the blowing up of The Garrison Pub. Irene states that this is a "unique political situation" and that they have a "shared interest.", in defense of his mocking commentary about the alliance between two pro-treaty Paddies and an agent of the crown. Thomas deduces that he was chosen for the mission, because this way, the crime would be seen as gang related and not political. After throwing in front of him the file containing the information necessary to carry out the assassination of Field Marshal Henry Russell, Irene tells Thomas that no connection must be made between them and the mission.

“In all the world, violent men are the easiest to deal with.” — Irene to Thomas

"From now on, Mr Shelby, you shut your fucking gypsy mouth and listen to your instructions." — Irene to Thomas

“The King offers you a peace treaty, and you start a war about it. That’s funny, don’t you think? A war about peace." — Thomas to Irene 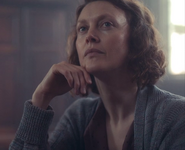 Thomas, Irene and Donal Henry at the Black Lion.
Community content is available under CC-BY-SA unless otherwise noted.
Advertisement