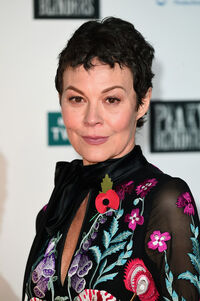 Her notable roles include playing Mama Jeanne in Hugo (2011), Narcissa Malfoy in the Harry Potter film series (2009-2011), Cherie Blair in The Queen (2006), Madame Kali in Penny Dreadful and the lead role Emma Banville in Fearless (2017).

She married actor Damian Lewis, an actor who's well-known in TV series Homeland, in 2007. They have two children.

Add a photo to this gallery
Retrieved from "https://peaky-blinders.fandom.com/wiki/Helen_McCrory?oldid=11307"
Community content is available under CC-BY-SA unless otherwise noted.