View source
watch 01:57
Who is Grace Shelby?
Do you like this video?
Play Sound

Annabelle Wallis
Grace Helen Shelby (née Burgess) was an Irish barmaid who took up employment at The Garrison Pub, and secretly operated as an undercover agent for the Birmingham Police. Her mission involved getting close to Thomas Shelby whom she fell in love with. He too returned the sentiment but was heartbroken when he discovered her treachery.

Having left for New York, Grace returns mid-way through 1922, married to an American businessman, but when she reunited with Thomas, it was clear their prior feelings have not dissipated. Their reunion results in Grace's pregnancy, which led to the birth of their son Charles. She married Thomas sometime in 1924, which was made possible by her first husband's suicide.

She was later murdered from a bullet that was meant for Thomas Shelby. After the incident she appears as a hallucination to Thomas, who remains grieving long after her death.

Grace is an Irish woman of a Protestant background. When undercover she claimed she was from Galway, and her accent (maintained throughout the series) points to Galway likely being where she was raised . Her father, a colleague of Chester Campbell in the police force, was killed by the IRA.

Grace shows up for a barmaid position at The Garrison Pub, the rowdy bar where the Blinders frequent. She’s educated and refined and clearly doesn’t belong there. At first Harry Fenton, the landlord, turns her down, but Grace sings part of a song that wins him over. She meets Thomas Shelby for the first time when serving in a full house of men on their way to a football game. She brings him a bottle of rum on the house, and the two are clearly intrigued by one another.

Later, Mr. Campbell meets Grace at the statue room of a museum; she is secretly an agent of the Crown sent to spy on the Shelby family.

Thomas asks Grace to accompany him to the Cheltenham races, which she agrees to in exchange for being allowed to sing in the pub once a week.

After eavesdropping on Thomas’s conversation with some IRA men, Grace follows one of the men as he goes down a back alley. He disappears at some point and then attacks her, holding her. She shoots him and leaves him to die.

Later, Thomas Shelby and Grace finally have their date at the races. However, Thomas makes it very clear to her he’s there on business, and Grace is horrified to be offered up to Billy Kimber as a sweetener if he agrees to go into business with the Peaky Blinders. Terms are discussed and Kimber takes Grace back to his house. At the last minute, Thomas averts Grace being raped by Kimber, bursting into the room and declaring that she is a whore with the clap (syphillis).

Grace learns where the Peaky Blinders keep their "contraband", but Inspector Campbell's raids fail to find the guns. When Thomas takes her to the church "for confession", Grace fears that her cover has been blown. However, he instead offers her a job. He has heard that Grace has been keeping the books at The Garrison Pub because Arthur is incompetent at managing money. He wants her to keep the Shelby & Co books and bringing a touch of class to his business meeting. Thomas seals the contract with a kiss.

Now working on the books of the Peaky Blinders, Grace learns that money is regularly sent to Danny Whizz-Bang, whose grave Grace has seen. She meets with Inspector Campbell and tells him where she believes the guns to be, and that she wishes to resign. Afterwards, Campbell proposes marriage to her but she refuses. Spurned and suspect of her feelings for Thomas, after dealing with the IRA men trying to buy the guns, Campbell goes after Thomas with the full force of the police. Grace hides Thomas from Campbell and they ended up back at her place.

At The Garrison Pub, Grace and Thomas serve drinks to the Peaky Blinders as they get ready bring down Billy Kimber at the Worcester Races. Grace tries to tell Thomas the truth of her betrayal, however they are interrupted - Billy Kimber and his men are on their way to kill the Peaky Blinders. Thomas realises the only other person he spoke to about Black Star Day was Grace.

While the Peaky Blinders get ready for battle, Aunt Polly pays a visit to Grace and tells her that Thomas may forgive her, but she never will. As Grace standing on the train platform edge ready to leave Birmingham for America, Inspector Campbell comes up to her and place a gun into her face and waits to pulls the trigger.

It is revealed that Grace survived her confrontation with Inspector Campbell, by shooting him through her handbag in the leg.

Fast forward two years and Grace is now married to Clive Macmillan a rich banker and living in Poughkeepsie. She sends a letter to Thomas, but he burns it unopened.

Later, Thomas learns that Grace is in London, and calls her at the Ritz Hotel in London, and waits. When her husband answers the phone, Thomas doesn’t say anything, just puts the phone back down. Grace asks “Who was that?” But she knows.

Grace is actually back in London to see a fertility doctor with her new husband. Grace lies to her husband and runs out to see Thomas at his sisters house in primrose hill, where after some insults about hurting each other, she came back when Thomas takes her on a date, asking her, “Do you like Charlie Chaplin?”. Grace believes that Thomas intends to take her to the movies, but actually brings her to a club taken over by the Shelbys that Charlie Chaplin visits. Back at his place they get down to a steamy reunion on the couch. After they button up, Thomas asks to see her again and then urges her to tell her husband the truth.

Grace tracks Thomas to the Epsom Races, where she tells him that not only is she still in love with him, she’s now carrying his child. However, Thomas is just about to kick his assassination plan into gear.

During the time skip, Grace gave birth to a boy, Charles Shelby. Grace marries Thomas, a union only made possible by her former husband's suicide, and they buy a house together.

She is shot at a formal party by an Italian assassin by order of Vicente Changretta, and dies shortly after, leaving her son solely in the care of Thomas, who remains grieving long after her death.

During 1929, Thomas hallucinates an apparition of Grace multiple times, in which she repeats back their old conversations and tries to convince him to take his own life.

In the final line of Series 5, Grace tells Thomas: "The work's all done, Tommy. It's all done. We can walk away from all of this. It's so easy and so soft. Such a small change." Following this, Thomas points a gun at his head, seemingly poised to pull the trigger. Female breaths soundtrack Tommy's hallucinations, which supposedly represent Grace's last breaths before she died in Thomas's arms in Series 3.

Throughout Series 1 Grace is portrayed as an undercover agent/operative working for Chester Campbell to gain information about Thomas Shelby and the rest of the Peaky Blinders gang to determine where the guns are. However, her feelings for Thomas grow, and she switches allegiance to the Blinders.

By the end of Series 1 she and Thomas Shelby became lovers, but she eventually leaves for America, urging Thomas to come with her. However, Thomas refuses her offer. He said that he was worked too hard to leave both his family and city behind.

Two years later, Grace is now married to Clive Macmillan, a rich banker and living in Poughkeepsie, New York. However, her feelings for Thomas have not faded. When she comes to London, she meets Thomas and they make love. She later reveals to him that not only is she still in love with him, but she’s now carrying his child.

In Series 3, the pair marry and are happy living in a beautiful country estate with their young son, Charles. She was shot dead while they were hosting an evening party, killed by an Italian assassin on the orders of Vicente Changretta.

In Series 5, Thomas is being haunted by Grace’s death and hallucinating her ghost.

As of season one, Chester Campbell is Grace's commanding officer and supervisor whom she worked closely with. Prior to their arrival in Birmingham, little is known of their relationship beyond that he had worked together with her father in the past.

Early in the season, Inspector Campbell exhibited what seemed to be fatherly concern and affection for Grace, when he tells her to be careful in her undercover work around the Peaky Blinders and particularly, Thomas Shelby.

As the season progresses, however, Inspector Campbell becomes more explicit about his affections for her. This culminates in a marriage proposal after the stolen guns are found. Her rejection comes as a surprise to him, despite the fact that she explicitly asked him to spare the life of Thomas Shelby, not in the capacity of an agent, but asking for his word on the matter "as a gentleman". His surprise quickly turns to anger as he deduces Grace's feelings for Thomas. 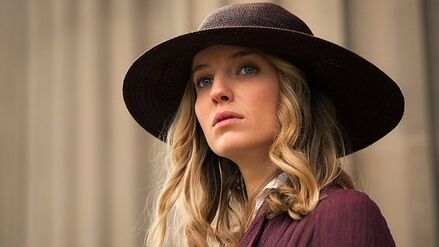 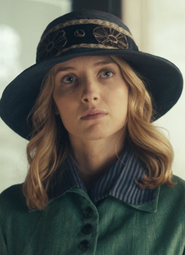 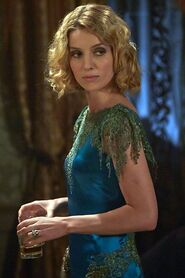 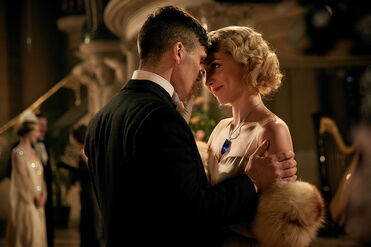 Grace and Thomas Shelby in Series 3
Community content is available under CC-BY-SA unless otherwise noted.
Advertisement