View source
watch 01:35
Who is Finn Shelby?
Do you like this video?
Play Sound

Present; main character
Finn Shelby is the youngest son of Arthur and Mrs. Shelby, youngest brother of Arthur, Thomas, John and Ada Shelby, as well as being the husband of Mary Shelby. Finn is a former member of the Peaky Blinders gang, having been banished from the family for his carelessness as a gang member.

Finn was born in 1908, making him the only Shelby brother not to have fought in the First World War due to his age. Though he is a Peaky Blinder, his brothers often watch out for him as he learns the trade and grows into the role.

In 1919, Finn is eleven years old and only has a minor role in the family business, with no real power. His aunt Polly often tries to shield him from the worst excesses of the Peaky Blinders. He is closely guarded by older brother and leader of the Peaky Blinders, Thomas Shelby.

Although Finn is older now, his brothers still keep him from the violence of their life.

At the day of the grand re-opening of the Garrison Pub, Thomas tells Finn to go get his brother Arthur to come to the event. After seeing Arthur's violent episodes many times, and with the suggestion from his brother Thomas, Finn introduces Arthur to a drug called Tokyo (cocaine), and tells him only to use it on race days and special occasions.

They take Finn with them to the Epsom races, where Arthur, John and the gang hold up their rival Sabini’s bookmakers and burn their licences. However, Finn is only allowed to act as lookout.

Finn is 16 now but still kept away from a lot of the business by Arthur and John. However, he is allowed to be present in the meeting with Vicente Changretta, and accompanies Arthur, John and Isaiah. He also witnesses the murder of his sister in law Grace Shelby, and along with his brothers, seeks revenge for her death and they kill her murderer.

Since John's death, Finn is taking his first big steps in the family business. He loses his virginity to a low-cost prostitute, despite his political standing as a member of the Peaky Blinders. Finn blinds one of Changretta's men that attacked Arthur Shelby during the fight between Bonnie and Goliath.

This article is a stub. You can help Peaky Blinders Wiki by expanding it.

During an excursion to the Limehouse in Chinatown, Finn, despite Tommy's orders to stay put, gets shot in the arm by a pimp; Aberama Gold later removes the bullet in Ada's house, where she tells Finn that he has nothing to prove. Finn is in charge of watching bookmaker Billy Grade conduct football betting business and the two became fast friends, or so he thinks. He reveals Thomas Shelby's plans to Billy Grade moments before their execution, jeopardizing the assassination, allowing Oswald Mosley to escape and allowing Thomas's betrayal.

Arthur Shelby is Finn's oldest brother and the one he is closest to out of the four. He and aunt Polly raised Finn when his mother died and his father abandoned the Shelby Family. Maybe this is the reason why Arthur tries so hard to keep Finn out of the illegitimate business. Arthur and Finn are first seen together in Season 2, at the day of the grand re-opening of the Garrison Pub.

Thomas Shelby is Finn's second oldest brother. Tommy rescued Finn from his car when he was younger after a hand grenade was put in it by the Lees. Finn tells Tommy he was just pretending to be him, but Thomas warns him after the booby trap explodes that that is exactly the reason why he should never pretend to be like him. When Finn is older, Thomas allows him to stay for a family business meeting, while normally he would never be included as Polly wanted to protect him from it. Finn admires his brother, aspiring to be like him and be a part of the Peaky Blinders.

Polly Gray is Finn's Paternal aunt. Due to the death of his mother, abandonment of his father, and his brothers going off to war, Aunt Polly has been the sole caretaker of Finn. Polly is very protective of the youngest Shelby, and this may be further exaggerated by the loss of her own children, Michael and Anna. Polly is very vocal about her disapproval of Finn's role within the Peaky Blinders and butts head with Tommy on this issue frequently.

John Shelby is Finn's third oldest brother. John is often seen giving Finn a hard time. Whether giving him a shove, cuffing him upside the head, or taking a drink from his hand, John likes to flex his older-brother privilege on the only brother he is able to. This might also be amplified by their closeness in age, as Finn is much further removed from Arthur and Thomas, who seems to act more paternally to their youngest sibling.

"When did either of you two do a day's work?"
"When me and the boys are feeling blue, this is what we do: it's called Tokyo." 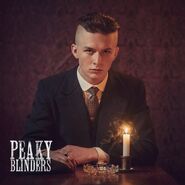