View source
watch 01:24
Who is Esme Shelby?
Do you like this video?
Play Sound

Left the Shelby Family, after her husbands death

She has little involvement within the Shelby family business or the Peaky Blinders, rather the marriage between the two was arranged in order to bring peace between the two families and provide a mother for John's four children.

Esme Martha Shelby Lee is a Romani gypsy and part of the Lee family. In her youth she spend a lot of time with horses, she apparently had a lot of other affairs before marrying John Shelby.

In Series 1, Esme Shelby first appears in 1.04 when Zilpha Lee and Thomas Shelby arrange the marriage between Esme and John Shelby. According to Thomas, she had "gotten wild" and needed marrying off. Similarly, so did John, since he was left widowed with four children who he didn’t know how to take care of. Neither of them seem much opposed to the union after they meet each other and even appear to be sexually engaged later in the series.

In Series 2, Esme and John both seem to be against the expansion to London, as seen in the family meeting in 2.01. Esme mentions having a child by John during the same meeting and warns Tommy against going to London. She also mentions wanting to live in the countryside and "keep chickens", which shows how she and John have gradually grown more domesticated. However, Tommy seems to be determined to expand into London and tells them that they can walk out the door anytime they want.

She’s also seen working in the betting shop, most notably when May Carleton comes in to talk to Tommy Shelby in 2.04.

Esme also tries to appeal to Tommy by suggesting their family go on the road, which suggests that Esme is unhappy with the Shelby family lifestyle. However, Tommy quickly tells her off and rejects her proposition.

In Series 3, Esme appears in Grace and Tommy's wedding, as well as the Shelby Foundation dinner, and is present at the time of Grace's death.

In 3.02, Thomas Shelby walks in on her and her husband, John, having sex in the betting shop. Later, they get captured by Scotland Yard but are eventually released. She appears to be pregnant with her second child with John and continues to work at the Shelby betting shop.

In 3.04, Esme complains when the men all leave to go hunt and is seen protesting in protests organised by Jessie Eden alongside Polly, Linda and Lizzie. Later in the episode, she’s caught by her husband John, trying to steal some money out of the family vault in order to sustain her cocaine addiction. She tells him that she cannot live "cooped up", suggesting she can’t deal with being out of the road with the gypsies. John then promises that he’ll buy them a house and shows his affection, as well as love, towards her.

In 3.06, she, as well as the rest of the family, are dragged away by the police during the family meeting.

In Series 4, Esme and John appear to be living together in a house on the countryside during 4.01. They invite the Shelby family to their house to celebrate Christmas, however, due to receiving "the Black Hand", are unable to celebrate as promised. Esme seems to be angry at John during the same episode when she sees him with "the Black Hand", still angry at Tommy for "sending them to the noose". Esme is reluctant to coming back to the Shelby business and discourages her husband from doing so. When Michael Gray arrives to warn the couple, she tells him to leave, unintentionally causing the death of John however, when the members of the Italian mafia start shooting at him and Michael Shelby.

In 4.02, Esme is seen devastated at John's death and visits the morgue to see his dead body. She curses his brothers as they leave the morgue and appears to take off John's rings before informing him that she will be taking her children on the road, " to live with decent people". Esme is not present at his funeral.

Esme is the wife of John Shelby. Though at first their marriage acts as a truce between their two families it becomes clear that the two form a strong bond. In Season Two, John and Esme are both wary about Thomas' plans for London with Esme saying she wants John to be able to watch their son grow up and live in the country. In Season 3 Esme is pregnant with, presumedly, her third child. John clearly understands and cares for Esme as he promises to buy her a house with land so she won't feel cooped up and defends her against Thomas when he accuses her of betraying them. In Season 4, after John gets murdered, she appears to be devastated and promises to him that their children "will never know the cursed side of this family".

Esme is Thomas Shelby's sister-in-law. In Season 1, Thomas arranges her marriage to John and even walks into them as they are having sex at the end of the season. However, they have no other interactions apart from that. In Season 2, Esme suggests to Thomas that the family should ride away, causing him to get angry with her. Throughout Season 3 and 4, she appears to have developed quite a dislike against Thomas, culminating in the death of her husband, which causes her to curse him and Arthur as she leaves with her children to the road.

"But London is just smoke and trouble, Thomas."

"I don't need a knife to stop me telling secrets given in confidence. It is a matter of honour."

"Born riding. I slept in a manger when I was a baby."

"Your Gypsy half is the stronger."

Thomas Shelby: "I will cut you from this family."
Esme Shelby: ''What family?"

"Them bastards down there shooting deer. Me five months gone, sat here like a pudding."

"I'm taking the children on the road, to live with decent people. They'll never know the cursed side of this family." 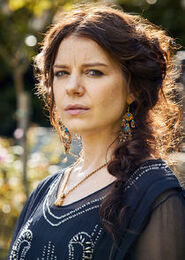 Esme in the Shelby Home & Betting Shop during Series 2.