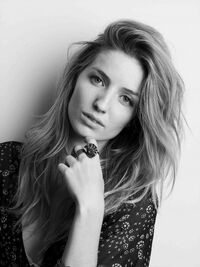 Annabelle Wallis was born in Oxford, Oxfordshire, in England but she grew up in Cascais, Portugal. Her mother is the niece of Richard Harris (Harry Potter), therefore, Annabelle is the cousin of actors Jared Harris (Mad Men) and Jamie Harris and director Damian Harris. On her father's side, she is related to Marie Lloyd, a music-hall singer in the early 1900s.

She attended the Saint-Dominic's International School and she is polyglot; she speaks fluent English and Portuguese as well as French and Spanish.

Wallis started in 2005, in the Bollywood movie Dil Jo Bhi Kahey and appeared in a few B movies before her breakthrough in 2009 as queen Jane Seymour in Showtime's The Tudors, alongside Jonathan Rhys-Meyer. She appeared in X-Men: First Class, Madonna's debut movie W.E: Wallis and Edouard and she also starred in the first and only season of ABC's drama series Pan Am, alongside Margot Robbie.

In 2012, she landed the part of Grace Burgess, an Irish barmaid and agent of the Crown, in the critically acclaimed crime drama Peaky Blinders. Alongside actors Cillian Murphy, Sam Neill and Helen McCrory, her performance corroborates her status of promising actress. In 2014, she played Muriel Wright in the mini-series Fleming: the man who would be Bond and joined the Conjuring universe by getting the leading role of Mia Form in the horror film Annabelle. She left Peaky Blinders in 2016, after three season and starred in three films: The Brothers Grimsby, Come and Find Me and Mine. In 2017, she joined the Dark Universe of Universal studios by portraying the archeologist Jenny Halsey in the supernatural adventure film The Mummy, with Sofia Boutella and Tom Cruise. The same year, she was directed by Guy Ritchie in the epic fantasy film King Arthur: Legend of the Sword.

In 2018, she portrayed journalist Rebecca Crosby in the comedy film Tag. That same year, Wallis lent her voice to Zora, an artificial intelligence, in Calypso, the second episode of the mini-series Star Trek: Short Treks.

In 2019, she will star in two science-fiction films: Boss Level, directed by Joe Carnahan, with Mel Gibson and Naomi Watts and Warning, directed by Agata Alexander, alongside actresses Laura Harrier and Charlotte Le Bon. The actress will also return to television in Showtime's drama series The Loudest Voice in the Room.

She is an activist and uses her platform to speak up against gender inequalities, the Brexit referendum and to show her support towards minorities, the LGBTQ+ community and refugees. She participated to various campaigns: #DontFuckMyFuture, #ChooseLove for Help Refugees and #ChristmasJumper for Save the Children. She is a feminist and helped raising money for Women for Women International at the Letters Live event in 2017.

She dated model James Rousseau, singer Chris Martin from 2015 to 2017 and is now in a relationship with the american actor Chris Pine since April 2018.

Add a photo to this gallery
Retrieved from "https://peaky-blinders.fandom.com/wiki/Annabelle_Wallis?oldid=11375"
Community content is available under CC-BY-SA unless otherwise noted.