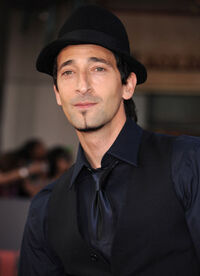 Adrien Brody is an American actor and producer. He received widespread recognition and acclaim after starring in The Pianist (2002), for which he won the Academy Award for Best Actor. Brody has also starred in The Thin Red Line (1998), The Village (2004), King Kong (2005), Predators (2010) and The Grand Budapest Hotel (2014).

Add a photo to this gallery
Retrieved from "https://peaky-blinders.fandom.com/wiki/Adrien_Brody?oldid=10658"
Community content is available under CC-BY-SA unless otherwise noted.